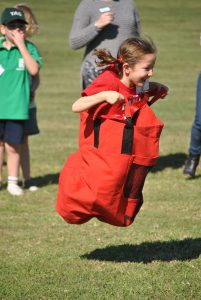 Relay races are a fun way for kids, especially preschoolers, to learn sportsmanship as they compete against other teams to win. They’re a great activity to include in your summer cookouts and neighborhood block parties with friends and family. There are many ways to play, but you usually will split into two (or more) teams with an equal number of players on each team. Leaving plenty of space in between teams, each team stands in a line as one player at a time goes from the start to a certain point ahead of them (perhaps 20 feet, more or less depending on your children’s age and skill level), and back to the start, doing a movement like running or skipping. After one player returns to the start, the next player takes their turn. The team whose players complete their turns first wins the game.

Before playing, make sure there’s enough room to race safely without obstacles like rocks and away from potentially dangerous objects like barbecue grills. An open backyard or field at a park away from the road are great locations to do relay races. Even the adults can participate with the children! You can make teams by family, who has a summer birthday vs. who doesn’t, and whatever other criteria you can think of.

Here’s a list of different relay races your children can try: